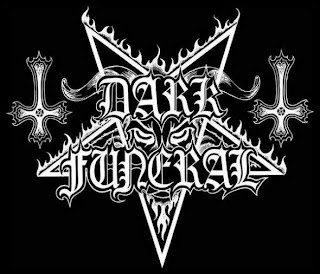 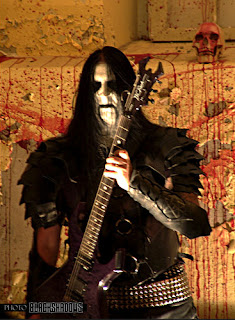 For many years Swedish band Dark Funeral has been one of the most successful acts in black metal. 18 years ago guitarists Blackmoon and Lord Ahriman started the band and two years after releasing an EP in 1994 simply called Dark Funeral, the band released the legendary The Sectrets of the Black Arts. Since that time the band released 5 more albums. Angelus Exuro pro Eternus from 2009 being the latest one. Main band member Lord Ahriman answered some questions.

- It shocked me a bit that it’s already 15 years ago that The Secrets of the Black Arts was released. I remember that album as a very promising start. High quality high speed black metal. How do you look back to the years of the beginning of the band?

Yeah man, time flies fast! The early years was quite chaotic and crazy to say the least. However, I still remember it as a great time.

- The album after that, Vobiscum Satanas, is often mentioned as Dark Funeral’s best album. Do you agree with that?

Here's the deal. For me each album reflects my, and the band´s, state of mind at the period of time it is written and recorded. After that I/we move on obviously. New things happens in life, new things pisses me off and whatnot. So for me it's always the very latest album I/we have written that lies closest to my soul, if you know what I mean!? However, I still enjoy playing many of the songs from the Vobiscum Satanas album, and especially the title track.

- All Dark Funeral albums are of high standards. None of the albums is disappointing in any way, despite the band had quite a few lineup changes. How does Dark Funeral maintain this high quality?

Thanks. Ever since the Vobiscum Satanas album I have been main responsible for the song writings and so forth, so that may explain a lot. Also, every time we have been through a line-up change we have always raised the bar for ourselves. And at the same time we have been fortunate to find new and more talented musicians.

- A lot of modern black metal bands take their lyrics pretty serious. They really stand for what they preach in their music. Is this also the case in Dark Funeral?

Of course. But I'm pretty private, and not much of a talker. And besides, I think it is easier to express myself through music than through words. However, through the music I share enough and invite the listener to a hellride throughout my own private darkness.

- A few years ago you released  an enormous amount of live material on DVD’s. First of all: thanks for that! But why so much of the same songs and why is it all recorded in more or less the same period?

Well, the whole idea with the series of those two DVD's was to give the fans a closer insight from our world-wide touring for the "Attera Totus Sanctus" album. And at the same time offer them a historic hellride with tons of amateur footage throughout our entire career. And in a way, part one, which feature only shows from the European leg of the tour, was meant to serve for the European market, while part 2, which feature shows from the South American part, for the South American market.

- I noticed that Emperor Magus Caligula thanked the audience quite a lot during live performance. How important are the fans for you?

The fans are obviously a very important factor for any band out there. Unfortunately some bands get such an ego boost when they reach a certain success, whereof they forget that part and lose touch with reality. That something we never have, or will ever do. We have always tried our best to treat our fans with the respect they deserve, and we're not afraid to show our appreciation towards them, especially not when we're on stage. However, sometimes it obviously gets too intense so one have to keep a certain balance and distance too. I'm after all not the most social guy on the planet. And I'm not here to be everyone's best friend.

- Last year three members left Dark Funeral. One of them was singer Emperor Magus Caligula. Did you fear that this could be the end of Dark Funeral?

No. And even though we've been pretty tight as a band, fact still remains that I have always run pretty much everything by myself, which includes everything from the song writings to the business side of things. Chaq Mol have obviously been at my side at all time, and still is. So in that sense nothing have really changed. I'm not the one who look back, but rather forward and try to overcome whatever situation that occur. And as long as I personally have the soul in the band, I will continue to wave the flag of Swedish Black Metal. And no matter who stays or leaves, I will continue with the Dark Funeral crusade as long as my spirit is there.

- Fortunately Dominator returned recently and you also found a new singer. What are your expectations of the new line up?

Yes, Dominator is back! He's not only an amazing drummer, but also a very good friend. And I'm truly glad he's back in the band! Already when a line-up change was a fact, I/we set out with the intention to build a new, much stronger and sustainable line-up. And besides finding new, highly professional and totally dedicated members, one thing I really wanted, was to find members who shared a much stronger engagement, with everything that surrounds the band. And now when the new lineup is all set in place, I can only enjoy the shit out of the situation. It actually turned out better than expected. And I'm quite sure this will also be noticed, especially when you see us annihilating the stage again. Be aware! You're soon about to experience DARK FUNERAL in the most intense and hellish way ever!

- How is the search for a new bass player going? Any news about that?

Actually, we have had a bass player installed for the past couple of month already. He will be announced to the world shortly.

- Nowadays the Swedish black metal scene seems much more convincing than the Norwegian.  Bands like Watain, Ondskapt, Marduk and Dark Funeral don’t really seem to have any Norwegian competition. How did that happen? What went wrong in Norway?

Hard to tell, but I've never really experienced it to be some kind of competition between Sweden and Norway. Dark Funeral is in a league of it´s our own I think.

- What kind of music do you listen to? Any black metal recommendations?

I listen to all kinds of Metal, mainly extreme Metal though, but also some dark industrial stuff once in a while.

- What can we expect in the future? A new album? A tour?

We are currently busy rehearsing to get in killer shape and to be able to hit the road as soon as possible to unleash hell upon mankind once again! And as soon as we're "live ready" so to speak, there will hopefully be enough time to catch up on the writing process that I already have begun for a new full-length album.

- Thanks a lot for your time and answers!

Thanx for your interest and support!