Some of our articles get more than 2000 views, but not too many joined us at Facebook. You could do so! 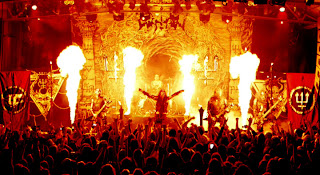 Not many black metal artists risk their life for their music. The members of Seeds of Iblis do. In their home country, Iraq, people are brought to death for being gay or 'emo'. It's not that hard to imagine what will happen if local authorities find out who are the people behind songs like "Inverted Hilal" and "Sex with Muhammad's Corpse". One of them is Anahita. Bass player and vocalist in Seeds of Iblis.

- For the people reading this that don’t know Seeds of Iblis: what is the band all about?
Seeds Of Iblis is a new wave of anti-Islamic black metal that rises from the Middle East, as a rejection and refusal against the religion of Islam, because Islam these days are trying to rule the world and spread lies and lies to brainwash the people and make them sacrifice their selves just to spread these lies.

- It must have been very hard to get in contact with other people in Iraq that are interested in creating such music. How did you accomplish this?
At first everything happened by chance, our interests have been gathered after melting two bands "Janaza" and "Tadnees", and so the influences and have been gathered too (Darkthrone, Gorgoroth, Burzum, Marduk, Mayhem, Ildjarn).

- European black metal is mostly anti christian and satanic and that’s pretty save here. You are putting your life at risk for your message. How afraid are you?

If the authorities found us they will cut our heads immediately, but the hate inside of us gives us more energy to do this and to spread our message to the whole world, we dont care if someday they kill us because we know that its very possible.

- Don’t you ever think about leaving Iraq?
Leaving Iraq is one of our goals now, but I guess its not save at the moment, because many people are searching for our names and some of our papers are not finished because we are afraid to be shown in public, so we are just waiting the things to calm down here so we'll get the chance to go out soon.

- The lyrics of Seeds of Iblis are anti islamic. Traditional black metal is satanic. Do you see your band as a satanic band?
No at all! We are not satanic and we somehow don't believe in the essence of the satanic roots, we are against all kinds of religions and we are against killing people and slaying them because of the personal beliefs, the Islamic relegion teaches the follower to hate all the other religions and to kill them and to take their lands if they dont want to believe in Islam, and that what we fight exactly.

- Touring is obviously not an option now. If it was, would you do it? If so: what would you expect of it?
Sure we are interested in making tours and some underground concerts, we did some in the last year, but it was very dangerous , but we are now waiting the chance to get the stage again.

- What kind of music are you listening to yourselves? Any particular bands?
Metal music in general (Thrash, Heavy, Old School, Death, Black, Pagan, Folk, Sludge, Doom) and many other non-metal styles that have a real motivation and creativity. 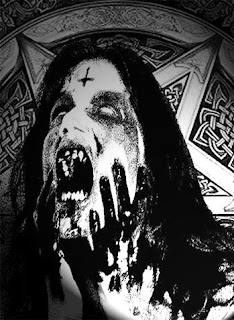 - I read on the internet that you have some problems finding a new label for the next EP. Did you find one already?
Actually not 100%, because most of the labels just change their minds after contacting us, because I guess they are not brave enough to accept the challenge to support us fighting a cruel religion such as Islam, and many of them are just a money-pussy magnetic that only search for money..

- Your EP was released in only 300 copies. Was that the choice of the band or was it decided by the label?
It was the choice of the label, for us we wished to have more copies so it will be available for many metal-fans that are interested in this kind of music and for all the people that try to explore new extreme music and even new ideologies.

- Thanks a lot for his interview and please take care of yourselves!


Seeds of Iblis have released only one EP so far and that's, due to the fact that it was limited to 300 copies, hard to find. A new EP should be released soon.