There are not that many bands that take black metal as such a serious matter as Ondskapt do. Their recordings are as dark as dark can be and their live performances are ceremonies of pure Satanic worship. Singer Acerbus was kind enough to answer some questions about the band, his view on black metal and the (near) future of the band.
- The tour of the beginning of this year has been canceled due to health issues. How are you doing? Is there any information about a new tour?

Well, I am recovering now after have been very ill. The tour we we're talking about was supposed to take place in May, we are still interested in doing this tour another time. We are booked for several live gig's now as my health permits me to go and perform again. First off is Devilstone festival in Lithuania the 16th of Juli, Germany Barther Open Air the 18th of August We are also booked for a US tour in Texas headlining the Prefest for Rites of darkness in December. More tour and live info will be posted on our website www.ondskapt.com and we will most likely be on tour through Europe as well.

- Some black metal bands make a huge effort on stage. A lot of effects, fire, smoke, blood, animal parts, etc. Others just keep it as simple as possible. How important do you think stage elements as these are?

It depends sometimes on the circumstances due to availability and of course possibility in doing things on-stage that would crave permits due to rules and regulations. But no law would let me do what I really would like to do on-stage, believe me it would be a lot more than the things you mentioned and also very messy. For us the most important thing is to enhance an atmosphere, that is that of the most putrid and vile and let the music talk for itself. If you speak of his name he shall appear.

- The term black metal has been the topic of a lot of discussion within the metal world. How would you define black metal?

In 90% of the cases I would define BM in the same way as Alice Cooper once did, as he read the extreme metal magazines or such when he would be on tour in Scandinavia during in the nineties as perceiving it as very "Spinal Tap" where you have one band after the other trying to look more sinister and evil than the other. I would like to say that things today have changed but I would probably be lying. Black metal in its purest form is dark and inspiring not only as a music genre but as a lifestyle for the individual.

- What do you think of the way the genre has been developing in the last 20 years? 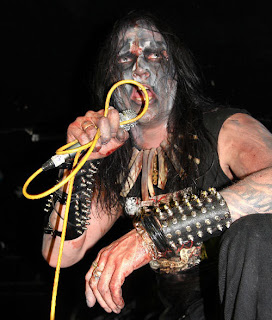 I would say that it has expanded and flourished into many different sub-genres through its prior existence as a experimental mixed genre. I think that BM is no longer as easy to define as many band nowadays play the genre in many different ways and express their music through many different forums, building their own platform for existence. Things have of course changed also due to the internet and its free availability of music in general causing higher demand to reach new heights in the industry. Anyone can record a demo even at home and just upload their music onto the net and have a BM band. This was not the case before when even demo-recordings costed money and effort to record. I would say that in certain degrees that the BM scene has become greatly developed and has a lot potential to grown even more, even though its purity has come somewhat diminished.

- As a pure black metal band, what is your view on the so-called  "post-black'-genre?

I've never heard of it.

- Swedish black metal bands somehow have an indefinable, typical Swedish sound. Where do you think the reason for this lies?

The studio's that have recorded them, the individuals behind the music, outside influences and chance. Bigger BM from Sweden have of course developed the trademark "Swedish BM" by simply being the band or bands that represent our country. Bands like Bathory, Marduk, Nifelheim and such have been kind of leaders in the Swedish BM scene and their sound is unique enough, but I think that what also give a significance is the fact that the recordings of certain BM albums became so good because of their productions.

- According to you, which bands deserve more attention than they are getting right now? Which bands do you admire? Any bands that you’d like to tour with?

Sweden has few BM bands at all that I feel interested in. What I feel would be highly interesting and important would be to see Ondskapt and Ofermod on a live tour.

- After the nineties black metal has slowly pushed back deep into the underground scene. Do you see this as a good thing?

I believe that this happened due to the search for that of what once was, the truth is it can never be regained not even by the individuals responsible for all of the commotion. But the underground scene is important none the less due to its integrity. The mainstream BM scene is only there to make profit, I see an innocents in the way BM should go about showing its true colours, when the bigger corporations are corrupt and perverted. A scene that is free and untouched by these demons will always be the more pure and honest and therefor never as appreciated in a whole.

- Erik from Watain once said in an interview that black metal has been seen as a joke for too long. Do you agree with his findings?

I personally see BM as a joke, at least 90% of it at least. The last 10% have at least earned the right to be called BM!

- A lot of black metal musicians say they get their inspiration from outside metal. Where does the musical inspiration originate from with Ondskapt?

There is several "classical" inspirations to our music that I still think to this day have created a spark to light the fire inside to write this music there in lies but also almost anything we could get our hands on that would sound as sick and malignant as possible. When Nabemih and I where young we both enjoyed the old classics within the BM scene but also classical music itself was very interesting for both of us, could be so arcane, vast and dark in its compositions that one simply became amazed. The variations and nuances in the music became so overwhelming at times that it was almost to good to me true. I believe that at that point in time when classical music was written and composed it was the black-metal of its time.

- I have noticed that most times the metal musicians are very friendly, calm people. Same goes for the black metal audience. How does that fit with the extreme character of the Music style and the lyrics?

I'm not sure and there is no point in psycho-analyzing this, although I am pretty sure that this is a fact due to that under all that make-up and spikes and so forth most of them are very normal people that think too much instead of acting. I don't blame them, they have no greater cause or will to power, they simply are only there for the music and are guideless in their mind of what BM is all about as usual! BM IS THE DEVILS MUSIC, THE AUDIENCE SHOULD SHOOT THEIR GUNS OFF INTO EACH OTHER INSTEAD OF WEARING SPIKES! 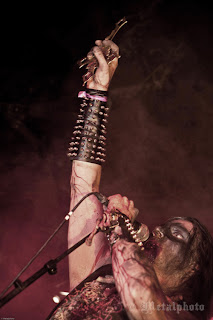 - There was quite some time between Arisen from the Ashes and the previous album Dödens Evangelium. Has Ondskapt become the most important band for all band members since the release of the latest album?

I don't work with people that do not have the power to instigate their own will into that of what is more important than themselves.

I marvel at the fact of where not only reason and common sense is set aside but also hated and cast there of. Mankind is soon as depleted as everything else in this devil's world and is raping itself into that of which is unnatural. New revelations are being written in where perversity versus humanity. My god is at work when demons are possessing you! To believe those whom deceive becomes fact and choirs of taring and shrieking whooms wonder in the night. In this lies a monumental meaning lead to truth. In there lies damnation! Through time passed on, Catharsis is forever lost. In time hellfire devours an unlawful gathering of souls allas a mere insignificance to a greater empire of one. Fathomless guages of a luridly lurking festered, being of unsane mannors loomed at the light smirking at a reflection of beauty so infinite as a sunken dream. All sickness within our malevolent gathering and within our souls is to plunge into being a redeemer such as of a plague to wipe out the impurities that have infested it's self upon humans. Ever so slowly, crawling on its warted edifice perhaps the time will come when this suffering could surpass, though dire certainty tell us otherwise.

- Christian influences are drawn back more and more within Europe, while the Islam seems to be pushing forward. Is your view of the Islamic version of Satan equal to the Christian one?

In the end it doesn’t matter. They are all perverted pigs getting fucked by force far greater than even myself can grasp. They have by birth already been condemned into sickness and twisted logic. As a million so alike, as a herd of sheep, so unclean in everlasting sleep...

- When can we expect a follow up to Arisen from the Ashes?

We enter the studio next year, after that we'll see.

- Is there anything that can be said about a change in direction? Or will it be in the same style as the latest album?

Nabemih and I have decided to move more in the direction of the material of Draco Sit Mihi Dux. I can assure you that it will be special and worthy of a divine cause.

- Thanks for your time!

Maybe needless to say, but Osmose productions is more than willing to sell the latest album in both cd and vinyl versions. Of course the previous albums are also still available!
Gepost door P op 16:04