It's been a while since I did an interview with Ondskapt front man Acerbus. So, time to catch up!

- I’ve seen your performance in Arnhem with The One and Somrak last year and I must say: quite impressive. How did you enjoy that tour? Any highlights worth mentioning?

The Ominous Worship of the Divine tour. I enjoyed the tour, the shows we played were in venues of more intimate atmosphere. I think that one of the best shows on that tour was when we played in Berlin. The show started with at first a passive audience and ended with a good climax of channelling energies.

- I heard some people in the audience saying that you used fake blood, and some guy that performed there that night mentioned fake blood as well, but near the stage it smelled like pig blood. So, what was it?

Oh really, although typical in a way that small minoritys within the audience say these things due to mearly having their voice heard. I can assure you that the blood is very real haha. We use ox blood mostly due to its disgustingly thick and almost at times purple color.

- In our previous conversation you mentioned that you would like to do things on stage that no law would let you do. Did you succeed in that? Any extremities happened? And what kind of things would you like to do on stage? 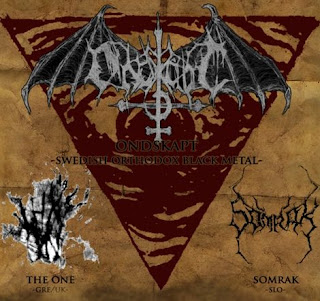 Haha, its kind of funny. "Nabemih" our former drummer and I used to sit and talk about the "perfect" show to play. And the idea got so absurd... At the time, talking about this we had never played live before with Ondskapt so now its quite some time ago. The idea was to first of all to have a projector showing pictures of all kinds of sick shit. To force all the women in the audience to bare a "burka" and then on stage we would have crack-smoking dwarfs and a masturbating she-male dancing on the stage like zombies. Also later in the show we would shoot fireworks into the audience and drop animal cadavers and rotten blood from the ceiling down onto them simultaneously behind LOCKED doors so that no one could get out of the venue.

We will have a better possibility to do this(without the burka, locked doors, cadaver and blood) in a controlled environment, but basically We will in the future try to all the time make our live shows as interesting as possible, to strive for the utter perverted state of mind through the music mostly though. We will always try to enhance the atmosphere of death to the fullest.

- Any idea when a new European club tour will be started? Maybe finally one with Ofermod?

Next year we will most likely tour with Endstille and Koldbrann on a European tour that will take place during the spring. I have no idea about Ofermod and Ondskapt yet, although this is one of my priorities to try to fix such a tour.

- The last few months a few very interesting books were released. Two in particular: Fosforos by Joahannes Nefastos and The Catechism of Lucifer by the same author. Have you heard of them, or even read them? If so: what’s your opinion about the books?

I have not been studying occultism for a long time, and no I have not heard about these books.
- The quite infamous O9A also released some older texts in book form again. What’s your opinion about the O9A and their theories?

In my opinion the ONA seemed much more appealing eight years ago. In my opinion it is a bit like a Freemasonry Order. I do enjoy reading some of their teachings but have never had contact with them or felt the need to. They seemed to be more interesting in my mind when I was younger.
- Do you have any other recommendations in occult/satanic literature?

Since I didn't recommend any so far I will not start now. I have no ambition to insinuate certain books, to try to wield or impress with my very limited knowledge of such things. If a person is truly interested in this type of thing he/she will know their own individuality within its vast halls.

- There are not too many real black metal bands left. We spoke about that before. I could imagine that you would want to keep in contact with some other serious bands. Are you in some way in contact with such bands? Or isn’t there a network at all?

We are always looking for “serious” bands to emerge from the surface unto our mutual ground. The answer however is yes and no concerning our involvement with other bands. I have seen that even though one would like to have a closed circle of bands/members within some kind of “common” grounds amongst other artists it is hard to have restrictions concerning free-will. We are used to being under our own flag so to speak, now more than ever.


- One of the authorities in black metal in my vision is the label Norma Evangelium Diaboli. Any chance you will release future albums there?

We have no contact with this particular label. I think they are doing a good job and so forth. At the moment we are getting the new Ondskapt material ready pre-production wise and we'll see during that time which label/labels may be interested in releasing the new album.

- A few months ago I read somewhere that Ondskapt will release a new album soon. Is that true? Nowhere on the internet I can find something about. All announcements are gone.

As I said, at the moment things might look a little bit dead but I think that when we are ready with our pre-production of the whole album we also will have something to show for recording in the studio. I must admit however that we might have been slightly too confident concerning announcements made through our FB page. We'll see, I feel none the less optimistic about solutions to this matter.

- Probably you’re busy writing new material constantly. In what direction are the new tracks developing? Indeed in the direction of Draco Sit Mihi Dux as you stated before?

At the moment the material is new and sounds old haha... I think that you will hear a mix of “Draco...” and even some “Slave under.....” influences when listening to the new album. But a lot of it is also very new and atmospheric audial listening. All I know is that you will know directly that it is Ondskapt while listening to it.

- Not too many people actually pay for the music they listen to any more. Does that make it hard to be able to record and release new material? 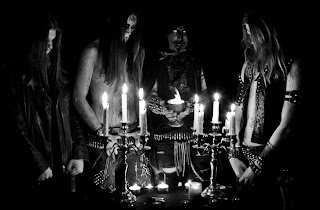 In a way yes, but in another way no. You see... for about ten years ago the market was still controlled by the bigger labels and now its an open market where labels in general are struggling to maintain their positions as before or at least do extensive damage control due to the “free market place”. Nowadays its easier for basically anyone to create the music and get it out to the public, this is and has been a problem ever since the internet became available to civilians. Labels nowadays have much less money to sign new acts or even old ones.

- Black metal is quite popular on vinyl again. Some bands even only release their albums on vinyl. How do you think about this revival?

I think its great because it makes music more nostalgic that way. I always remember that “old” feeling one can get from the vinyls, its great!

- Talking about new releases: any recent releases that you admired?

Yeah but you wouldn't know them and its too inappropriate to mention here haha.

- Some other bands released live DVD's or even music videos. Is that something Ondskapt would ever do?

In time I think that we will. I have wanted to do this for a long time, I believe this will be possible even this year, I don't want to say to much until things get confirmed, also concerning the booking details of that particular show.

- Thanks for your time and I hope to see you again soon!

On behalf of Ondskapt. / Acerbus.